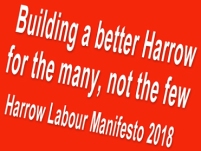 The Labour manifesto gives right messages but would this adequately help the May council election outcome, given the factors that are neither Labour doings nor controlled by Labour.
Well worded manifesto, launched last week, pledges to build Harrow homes for Harrow residents, keep Harrow clean, revitalise local economy, protect local vital public services against Tory cuts and protect those most in need.
The pledge includes creating 5,500 new homes, 3,000 new jobs and building a major new library in Harrow town centre.
The manifesto claims that despite relentless Tory cuts, Labour administration has worked tirelessly to make Harrow attractive – for example by cleaning up hotspot fly-tipping alleyways on “unadopted service” roads and investing millions of pounds in improving road and pavement conditions  across the borough.
Labour is also committed to review the number of councillors per ward with a view to lowering the cost of running the council.
However, all this might not overcome some unfavourable situations:
The independents in the Headstone North ward, who captured two seats from Tories previously, are not standing for re-election, meaning Tory voters are very likely to vote Tories this time.
A long standing previous Harrow on the Hill ward Tory councillor who was viciously expelled from the Tory group under councillor Hall’s deputy leadership, is back after years as a Tory candidate for Harrow on the Hill ward.
The ongoing  Tory divisive politics in Harrow East, championed by their MP Bob Blackman who actively targets voters from the Indian and Jewish background, became more obvious at the Kenton East by-election  where as expected , a temple orientated Tory candidate won Kenton East by-election last year. Considering that the other two Tory candidates for Kenton East are similar, the by-election pattern is most likely to be repeated.