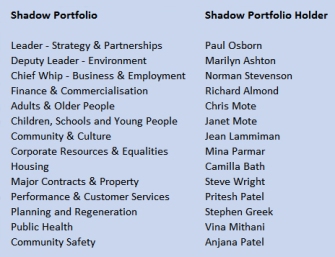 An interesting difference between the previous Tory group leader (Cllr Hall) and the present leader (Cllr Osborn) is that he recognises ‘compromise’ being a key quality of good leadership.
Therefore, the allocation of shadow responsibilities for the council work reflects good compromise – rewarding those who elected the leader and keeping those under wing who could rebel.
While such strategic appointments might help in running the group, there is another aspect which is more important. Both the council administration and opposition need to work together, pooling abilities and resources, for providing effective and better council services to the residents. In this context, there seem to be some anomalies in shadow positions. For example:
Council finances are quite complex and challenging but the councillor with finance expertise (Cllr Bharat Thakker) has been placed at the planning committee instead of giving him shadow finance portfolio.
Another challenging area of the council work is the planning, a dynamic process that is constantly evolving in response to changes within the community and which involves both control of existing and new development. Harrow has to strike good balance between meeting the housing demands of local community and preserving Harrow characteristics like 29 conservation areas, each having special interest derived from its architectural, townscape or landscape qualities.
Very unfortunate that the Tory planning expert  (Cllr Ashton) who held the planning portfolio in pre 2010 Tory administration and who masterminded  Harrow’s Core Strategy*, has been kept away from the planning since her comeback to the council in 2011 by-election because of the internal situations within the Tory group.
Some other shadow responsibilities like performance or safety make no real sense.
[*it includes land use policies that form the legal basis for deciding planning applications, allocating land and encouraging investment; also it specifies how much development will happen in the borough and where, when, and how it will take place].