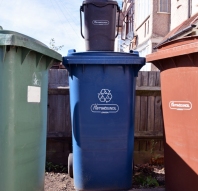 In money saving exercise, many parts of the UK are now moving towards three-weekly bin collections in a bid to cut down on residual waste and increase recycling, reports BBC.
Not only this, but at least one council (Conwy) has gone to four-weekly bin collections after long trial which brought more rats, seagulls and flies.
Harrow Council is responsible for collecting the waste that its residents produce and with increasing landfill charges and restrictions on waste disposal it is constantly looking to the future, which could include cost cutting in collecting/disposing off the waste.
The responsibility for waste treatment and disposal is held by the West London Waste Authority, of which Harrow is a member, along with Brent, Ealing, Hillingdon, Hounslow and Richmond upon Thames.
The six west London boroughs have prepared a Joint Waste Local Plan for their combined area. The plan sets out a strategy and policies for the sustainable management of all waste produced by the boroughs for the period up to 2026.
At present, the bins collections in Harrow is: a fortnightly collection of residual waste – green/ grey and blue wheeled bin on alternative weeks;  a weekly collection of food waste – a small 23 litre black bin and a fortnightly garden waste collection – the brown bin on a chargeable basis.
Would the Harrow council be able to retain its present bin collection arrangements or would it scrap the scheme  in favour of three/four-weekly collections or could it exercise its powers to “recover a reasonable charge” for collection of household waste under Section 45 paragraph 3 of the Environmental Protection Act 1990?