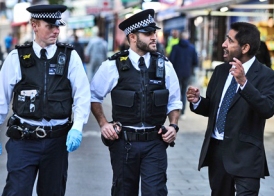 Harrow council supported Harrow Police together with Brent and Barnet Police as part of a knife crime campaign, which aimed to reduce the number of people – especially young people, carrying knives.
Operation Sceptre took place locally on Saturday 29 September around Brent, Barnet and Harrow to increase awareness of the dangers of carrying illegal weapons such as knives and the consequences.
In the targeted hot-spots in each borough knife owners were encouraged to give up their weapons safely and without fear of being prosecuted. Police officers also dealt with anti-social behaviour and carried out stop and searches, where appropriate.
North West Borough Commander, Detective Chief Superintendent Simon Rose said:
“Our message to those who are carrying knives or thinking about doing so is clear – it does not protect you, in fact, it makes you more vulnerable. So, make the right choice – lose the knife, not a valuable life.”
On his part, councillor Krishna Suresh, lead member for crime and community safety at Harrow Council said “Harrow has recently seen a rise in violent crime – the same as the rest of London and of course, this is worrying for the community.  We want to reassure residents that we are working hard to keep on top of this issue. Operation Sceptre is a good way to get that message across.”
According to official statistics from the Met Police, in 2018 there have been 1,296 stabbings in London up to the end of April.
“Violent crime in Harrow has increased by 60%, and it is no surprise that this increase correlates to the reduction in police officers on our streets” Gareth Thomas MP for Harrow West previously said.
It can only be good that the authorities are proactive in dealing with the increased knife crimes in Harrow, but not sure about long term measures to address the crime because of the serious resource implication.