UPDATED: Local community has worked hard to maintain good relationships amongst the groups of people in Harrow, a most diverse borough. Often Harrow council and police have organised come together events for Harrow communities to show unity against deplorable activities home or abroad that have adverse implications for the community cohesion and relationships locally.
But there are concerns that some, like in Harrow East Tory party, use their elected position to stir up emotions and endanger community relationships by taking sides with international sensitive situations such as the ongoing dispute in Kashmir (India) for self promotion / satisfaction. 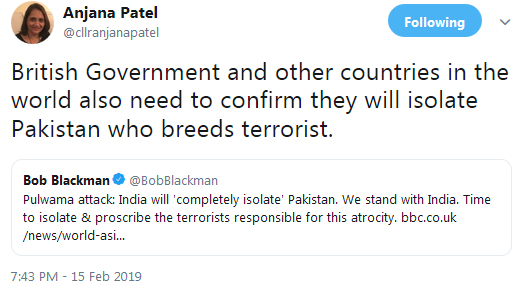 British government and Tory party positions are to let India and Pakistan resolve their internal and external issues, without blaming either side like who is/ is not breeding terrorists. Such a balanced approach makes good sense, particularly at the times of high tension between the two countries as is now.

While the two Tories (photo) are responsible for their poor performance, Harrow East Conservative Association has selected and nurtures them.
Harrow East MP Bob Blackman, who has calculated his votes, is well reported for divisiveness  (2) and endorsing far right elements (2) but it is somewhat unfortunate that a Belmont councillor, who is paid to serve her ward residents in council matters, has to follow the MP’s undesirable footsteps.
Tory Cllr Anjana Patel was defeated in West Harrow, rejected by the Cllr Susan Hall dominated Harrow West Conservative Association and given asylum by Harrow East Conservative Association apparently in a show of power to HWCA, particularly the old rival Cllr Hall.  She was then stitched up to Belmont (to tease Cllr Hall?) and therefore her apparent insecurity/ vulnerability seemingly requires the MP’s protection and support (Harrow council could note that Ms Patel tweets as Cllr Anjana Patel).
However, any divisiveness in Harrow is not acceptable and must be challenged!