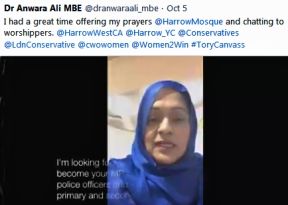 Soon after her selection as the Tory parliamentary candidate for Harrow West, Dr Anwara Ali visited Harrow mosque and said in her video clip that she had a great time offering her prayers and chatting to worshippers.
Later defending Boris Johnson ‘letter-box’ reference to Muslim women and calls for the Tories to launch an independent inquiry into alleged Islamophobia in the party, Dr Ali said the PM Boris Johnson whose forefathers are Muslim (but is he?), has apologised for the clumsy use of metaphors and that the Tory party is not islamophobic, it is Labours propaganda to smear them.
However, concerns about Tory party attitudes are widespread.
There was a “significant spike” in Islamophobic incidents after Boris Johnson compared women in burkhas to “letterboxes” in his Daily Telegraph column last year – a near four-fold increase (375 per cent).
Mohammed Amin, who served as chairman of the Conservative Muslim Forum quit the party after 36 years, following the announcement that Boris Johnson will become Prime Minister.
Tory peer Sayeeda Warsi, past co-chair of the Tory party, led calls to launch a “full independent inquiry” into Islamophobia in the party.
Writing for the Guardian, she said: “I’ve been warning my party of its ‘Muslim problem’ for far too long,” and said that elite indifference to the issue meant the Tories were stuck with a political strategy that amounted little more than “fuck the Muslims”.
Sajid Javid, the then home secretary contesting to replace Theresa May in Downing Street, urged his rivals to agree to a probe into Islamophobia in the Conservative Party.
A number of Tory party members have been suspended for posting or endorsing Islamophobic material online.
In the local context, Harrow East Tory MP’s divisive conduct has been a matter of great concern. Not only this but Harrow East Tories also seem selecting and nurturing Tory representatives who look much more interested in supporting Indian politics. There is no Muslim Tory councillor in Harrow.
As a Tory candidate, Dr Anwara Ali does not say how she would be challenging the Tory party divisiveness which has serious implications for groups of people!