Harrow councillor Anjana Patel (Con) has been widely reported for her ‘anti-Muslim tweet’ but she and Harrow Conservatives have failed to apologise for her unprompted tweet to the Nobel Prize winner Malala Yousafzai, demanding to know “how are you going to help?” after two Hindu girls were allegedly kidnapped, “molested and forcibly converted” to “your religion, Islam”.
This suggests that Yousafzai is responsible for the actions of other Muslims, which comes under the all-party parliamentary group’s definition of Islamophobia (Harrow council has adopted the definition).
Despite all this Brent North Tories selected her for the parliamentary seat.
The Harrow Times who has covered the story locally reports that ‘Harrow Conservatives have been contacted for comment’ (but obviously they have not responded).
Not only this but she is sharing photo evidence of her  close association with Harrow East Tory candidate Bob Blackman, home secretary Priti Patel and PM Boris Johnson.

In the same Harrow, Harrow councillor Peymana Assad (Lab), candidate for Ruislip, Northwood and Pinner, has apologised for 2012 Twitter post referring to Israel which used the word “gassed”.
She said “Some man I just met thought I was Israeli so I cracked the 10 lost tribes of Israel joke to him and he got gassed (slag for when one is overwhelmed or cannot hold your excitement any longer)”. 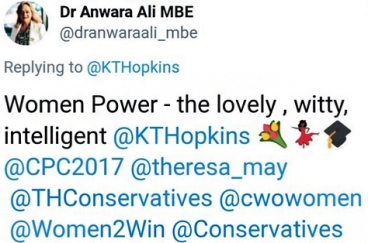 Similarly Harrow West Tory candidate Anwara Ali distanced herself from Kate Hopkins, a commentator well known for her habit of demonising Muslims, when her attention was drawn to a widely circulating twitter reply to Hopkins, seemingly by her.
Hopkins was included in the reply that described “women power – the lovely¸ witty, intelligent”.
“I do not share KH abhorrent & racist views, Judge me by the work I have done” said Dr Ali.